Is it Ever Legal to Use your Mobile Phone and Drive? 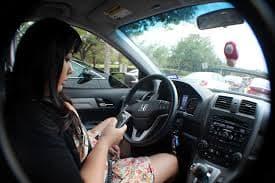 Is it Ever Legal to Use your Mobile Phone and Drive?

The legality and safety of using your mobile phone whilst driving has been big news recently. It all started with the fallout from an RAC survey which discovered 31% of people use their phone whilst driving, a shocking number even before it’s mentioned that it’s increased from just 8% of people surveyed in 2014.

Spurred on by this dramatic increase, the government quickly announced a toughening up of the laws around using your mobile phone and driving, with punishments becoming dramatically tougher.

What are the laws when using your mobile phone in a car?

As you know, it is illegal to use a hand-held mobile phone or similar device whilst driving. It is also illegal to use a mobile phone in the passenger seat if you are supervising learner driver, as you’re expected to be in control and ready to take over quickly should the learner struggle.

Alongside this: it is illegal to use your mobile phone when you’re waiting at a red light at the traffic lights. As the engine is running and the car is on the road you are still expected to be in full control of the vehicle and have the minimum of distractions.

There only case where it is legal to use your hand held mobile phone whilst driving is if you are making an emergency call on 999 or 112 and it would be unsafe or impractical to stop your car. Other than this, you need to be safely parked with the engine switched off if you wish to use your phone.

You are allowed to use hands free devices when driving, though the police may still stop and penalise you if they feel you’re distracted and not in control of your vehicle.

What is the punishment for using your phone and driving?

Currently, the punishment for a first offence is 3 points on your driving licence and a £100 fine. Multiple offences could be met with stiffer punishments, up to an including: a £1,000 fine, court and a driving ban.

However, tougher laws have recently been announced to combat the rise in people using their phone whilst driving, these are expected to come into force in early 2017.

The new laws on the use of mobile phones when driving are:

New drivers could also have their license revoked and be forced to retake their test if they are caught.

Sue has been the face of Oldham Reception for the last 19 years, assisting clients and staff alike! Wed Jan 26, 2022

Helen is another long standing member of staff who has developed and progressed whilst with the firm,… Thu Jan 6, 2022

From Paralegal to Partner. Click on to read about her rise through the ranks... Wed Jan 5, 2022